The Girl Who Kicked the Hornet's Nest (Millennium #3) 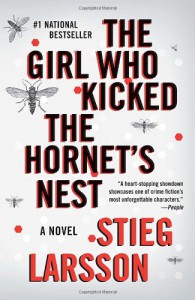 The finale of the Millennium trilogy is a satisfying conclusion to the story of Lisbeth Salander began in The Girl with the Dragon Tattoo. Taking up where The Girl Who Played with Fire left off, The Girl Who Kicked the Hornet's Nest follows first Lisbeth's struggle for first life and then her freedom with the assistance of Mikael Blomkvist and host of others. The introduction of "the Section" from within the Swedish Security Service in the role as the antagonist helps move the majority of the story arcs along in an unexpected twist than what one assumes is going to happen.

The development of each established and newly introduced character throughout the book is not only well done, but welcome after devoting so much time invested in them. The most important development is that of Lisbeth herself who transforms from someone uncompromising to someone who realizes her position as a full citizen after seeing all her demons expunged from her life, but only after a thrilling epilogue that wraps all the loose ends.

I can not express enough how much I love this book, but I read the last half of the book in just two days and as the title of my review states it hurt to put this book down when I had to.