The Epic Tradegy on Shakespeare's Stage 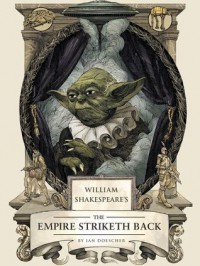 The wonderful combination of Elizabethan theater and the Galaxy Far, Far Away returns in William Shakespeare's The Empire Striketh Back by Ian Doescher. Combining his love of the classic trilogy and the Bard, Doescher followed up the overwhelming success of his first crossover adaptation by bringing further the tragedy of Episode V in all it's glory in the form of iambic pentameter, prose, and even haiku.

Doescher continued his excellent translation of film dialogue to late 16th century English with the addition of soliloquies, speeches, and asides that add depth to all the characters Star Wars have come to love. Lando, Boba Fett, and Yoda being the newest major characters to the overall story are given lines to better understand their inner character which aren't allowed to come out in the film. This approached allowed for a better understanding of Lando in particular giving the audience an insight about his motives through the latter part of the book. Unlike his first book, Doescher breaks away from iambic pentameter for two characters: Boba Fett as a bounty hunter is "base" enough to just warrant prose speech while Yoda's unique manner of dialogue was but into haiku. The inner feelings of Han and Leia towards permeate their scenes, giving a better understanding of their romance throughout the book. Doescher used the Chorus drastically less than he did in his previous effort and instead had characters detail the action like Shakespeare also did in his plays. Even with the use of all these inner monologues, Doescher is able to give "that scene" at the end of the film a suspenseful and stunning air about it.

In a 172 pages, Doescher brings the epic nature of Episode V of the Star Wars saga to the Elizabethan stage to amazing results. If you're a Star Wars fan you've got to get your hands on this book.