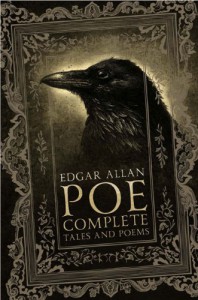 Edgar Allan Poe is best known for his dark and psychological poems and short stories that have had an influence not only American literature throughout the world not only in literature but television and film.  Yet while a number of Poe’s work has stood the test of time and made a large impression, a lot more expose stereotypical tropes and themes that repeat so much that they lose impact to the reader.

Before I go through the problems I have with Poe, I’m going to spend a little time praising his better pieces.  “The Raven” is obviously the best known of Poe’s poetry and arguably his best, even though you’ve might have read it or heard it read before just reading it again makes you appreciate it before.  The three Auguste Dupin short stories, the precursors to the detective genre, are wonderful reads in which Poe’s deductive reason is used well in written form to create fascinating mysteries and solutions.  Although I could go on, the last story I will mention is “The Cask of Amontillado” which is a fantastic revenge story in which the narrator has no qualms with it afterwards.

Unfortunately this unrepentant narrator in “Amontillado” is unfortunately the exception to Poe’s trope of the narrator going crazy with guilt and admitting his crime which is featured in many stories Poe wrote.  Along with a young woman always dying and premature burials, Poe’s writing is fraught with these tropes that after a while exhaust the reader with the almost predictable way a trope takes over a particular story to end with the same way.  While these trope takeovers are discouraging, the tendency of Poe to begin a short story with a philosophical discourse only for the narrator to suddenly go off on a tangent (usually on a murder he committed) that had nothing to do with the discourse at the beginning.  Frankly these literary quirks, or crutches, that Poe used throughout numerous compositions get tiresome while reading the entirety of Poe’s work and make one question his supposed literary greatness.