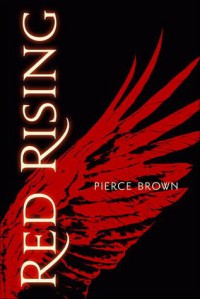 Beneath the surface of Mars human mine gases that will eventually lead to the terraforming and colonization of the red planet, but they have been lied to.  Red Rising by Pierce Brown is a dystopian young adult novel following a member of the lowest caste in humanities future attempting to position himself within the highest caste to lead a future rebellion for the betterment of all.

Darrow, a member of the lowly Reds, within days sees the end of his dreams of family and success in mining in his colonial town underneath the surface of Mars and is ready to die only to be dug up and shown the surface of Mars full of cities and vegetation that was said to be centuries away.  Feeling betrayed by his society not only for the injustice against himself but his people as well, Darrow agrees to undergo numerous surgeries to appear as a member of the highest caste in society, the Golds.  Through training and education he is able to pass the entrance exam of The Institute of Mars where young people of the caste compete to prove their potential as leaders so they can govern the Society in the future.  Darrow makes friends only on the first night is forced to kill one or be killed himself in The Institute’s first test.  What follows for the rest of the book is not only Darrow but every Gold at The Institute learning what it means to rule the Society that has lasted for centuries, but through he makes mistakes Darrow learns and is able to become a leader amongst the students and eventually is able to emerge as the competition’s victor in an unorthodox manner especially as outside forces attempt to have another student win for personal pride.

After waiting years to read this book, it was about 40% into the book that I realized that Red Rising was essentially “The Hunger Games in space” with elements of Divergent and other young adult dystopian series thrown in for good measure by the time I finished.  I realize that authors borrow elements from other authors, but Brown rips off of The Hunger Games is so blatantly bad that it hurt.  Frankly the mixture of so many things from other series could have worked if they were written well, but in this book it wasn’t.  On top of that, what Darrow goes through to appear as a Gold seems to be stretching credibility especially since the Society’s “Quality Control” performs tests on him, including blood which has DNA that should show he wasn’t born a Gold.  Though the action in the book was the best feature, the plot just didn’t live up to the hype especially after realizing how much is borrowed and not written in an interesting way from a new angle.

Red Rising might be enjoyed by numerous readers, but I’m not one of them and frankly while I got through the book I’m not interested in seeing what happens next.  So I’m selling this book and the other two books in the first trilogy to a friend who is really into young adult dystopia and hope he enjoys it more than myself.