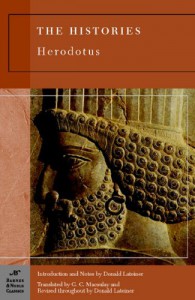 A generation had no living memory of the greatest danger that the Greeks had ever lived through, but one man decided to change all that and gift posterity with a new genre.  The Histories written by Herodotus details 80 crucial years from the rise of the Persian Empire to the defeat the remnants of Xerxes expedition and the events that led to the latter.

Using knowledge gleamed from extensive travel across the ancient world Herodotus begins his historical narrative by giving the ‘legendary’ encounters between the peoples of Europe and Asia before delving into the more ‘historical’ events that lead to Xerxes’ grand expedition.  Herodotus details the history of the kingdom of Lydia that was the first to conquer populations of Greeks, those in western Anatolia, and how its great king Croesus lost his war to Cyrus the Great thus placing those same Greeks under the rule of Persia.  The history of the Medes and their conquest by the Persians is related then the subsequent history of the Persian Empire until the Ionian revolt which led to the intervention of Athens and setting the stage for Darius expedition to Marathon.  Intertwined with the rise of Persia was Herodotus relating the events within various Greek city-states, in particular Athens and Sparta, that contributed to the reasons for first Darius’ expedition and then to Xerxes’.  Eventually his narrative would go back and forth between the two contending sides throughout the latter conflict as events unfolded throughout 480-479 BC.

The sheer volume of material that Herodotus provides is impressive and daunting for a reader to consider.  Not only does he cover the political and military events, but numerous past historical and general culture aspects as well as lot of biographies and antidotal digressions that add color to the overall piece.  Given that this was the first history ever written it’s hard to really criticize Herodotus—though Thucydides apparently had no problem later—but some digressions I wish Herodotus had left out or not heard at all.

The Histories by Herodotus is one of classic historical works that needs to be read by anyone who enjoys reading history.  Whether or not you love the style of writing or even the topic, this book is important because it literally is the first history book.