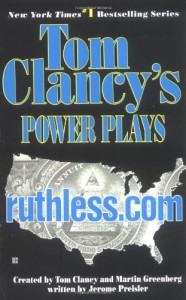 The new millennium started with a new kind of terrorism and now a new kind of security threat not only endangers national security but also corporations.  ruthless.com, the second book in Tom Clancy’s Power Plays, written by Jerome Preisler finds Roger Gordian’s UpLink International under pressure of a hostile takeover from a longtime rival while half a world away his security team stumbles onto evidence of a union of drug dealers, corrupt politicians, and Gordian’s own rival to shock the world.

Marcus Caine’s Monolith Technologies is attempting a hostile takeover of Roger Gordian’s UpLink International thanks to a secret friendship with a longtime Wall Street expert undermining UpLink on television and newsprint while battling Gordian on encryption deregulation in the media and Congress.  Half a world away in Singapore, Gordian’s employee Max Blackburn goes to met his girlfriend who works for Monolith’s Singapore division and who he convinced to spy on her employer, finding evidence of Caine’s illegal activities.  However, Caine and his East Asian associates found out and attempt to kidnap both her and Max but only succeed in getting Max which leads to his death.  The disappearance of Max gets his boss Peter Nimec anxious who has to tell Gordian, who doesn’t condone industrial spying, before heading to Singapore to find out what happen.  Nimec saves Max’s girlfriend from the thugs looking for her and gets the information she stole while Gordian upsets Caine’s takeover bid after surviving a contract killing.  Meanwhile UpLink security apprehends two mafia members attempting to steal encryption keycodes for a US nuclear submarine from a key-bank facility, which gets the Malay military to back up a similar facility from attack by rogue Indonesian military forces looking for codes for the same US nuclear submarine that has the US President and other regional leaders on it.  In the aftermath of the failed terrorist attack, Caine has a mafia gunman kill him while Nimec gets revenge for Max on the man who killed him.

While ruthless.com is based on a computer game like Politika, the story elements Preisler was given to work with resulted in a better-quality story in narrative flow and how the various subplots interlinked with one another.  The decision by Preisler to nix the Gordian separation/divorce subplot from the previous book was a massive improvement allowing the businessman and technologically thinking Gordian to come out more while the attempt on his life also allowed the reader to get a better insight into how he thinks.  Another strong point was Preisler’s giving the various antagonists some buildup early to give them gravitas, which means when the protagonists go up against them later in the story there’s importance to the confrontation in whichever way it happens.  The only downside was that Peter Nimec comes in relatively late in the book, especially if memory serves, he becomes the main action guy as the series progresses.

ruthless.com is a solid follow up installment in the Power Plays series that improves where the first book faltered.  Jerome Preisler writes a nice mixture of business intrigue and international terrorism plotting that keeps you looking forward to seeing what happens.