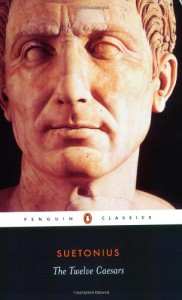 For the past two millennia Caesar has denoted the absolute ruler of an empire, a legacy of one man who ruled Rome and the men who succeeded him and used his name.  The Twelve Caesars by Suetonius gives biographical sketches of the men who ruled the Western world for a century and a half, from the end of the Republic to the death of Domitian.

Each of Suetonius’ biographies follow the similar pattern in which the individual’s heritage, political-military career, private lives, personal habits, and physical appearance.  Though the pattern is the same, Suetonius’ style is to slowly weave in elements of one section into another—except for physical appearance—thus not breaking a nice flow for the reader.  As the main source of Caligula (Gaius in the text), Claudius, and Vespasian’s family history, Suetonius not only adds on top of Tacitus but covers what was lost from his contemporary’s works.  Yet unlike Tacitus, gossip and innuendo features a lot in the work making this book a little bit racy compared to Suetonius’ contemporary.

The translation by Robert Graves—of I, Claudius fame—was wonderfully done and did a lot to give the text a great flow.  Of Suetonius’ text the overwhelming use of portents and omens was a bit too much at times, though given the time period of the historian’s life this superstitious view was a part of everyday life.

The Twelve Caesars gives another view of the men who ruled the Western world.  Suetonius’ writing style and subject matter contrast with Tacitus but only for the better for the reader of both who get a full picture of the individuals the two contemporary historians cover.