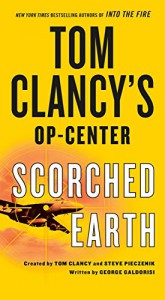 After making a huge propaganda killing against the United States, a terrorist leader is incensed when a retaliatory strike hits too close to home and makes his war even more personal. Scorched Earth is the third book of the Op-Center reboot and the first exclusively by George Galdorisi as retired Admiral Chase Williams coordinates his Op-Center team in fighting the war on terror that has suddenly become personal on both sides.

General Bob Underwood—a special presidential envoy for the Global Coalition to Counter ISIL—is kidnapped after his security detail is massacred then hours later is beheaded on live television. American forces retaliate with a strike on Mosul resulting in the death of the ISIS leader's son, his father promises vengeance. A homegrown terrorist cell kidnaps the admiral who oversaw the strike on ISIS but are accidentally foiled in their attempted to send him to Mosul to be killed and retreat to a hideaway in rural Maryland. Based off information that it’s Geek Team Op-Center’s SEAL team is sent to Iraq to investigate all the aircraft delivering to the city, but come up empty resulting in the Geek Team backtracking and the terrorist cell and finding their location in Maryland. Op-Center’s CIRG team locates the house and rescues the admiral while taking out half of the terror cell. Meanwhile the admiral’s son, a SEAL himself, believing the Navy fumbled the ball goes AWOL to Iraq with help from an old teammate and infiltrates the ISIS headquarters in Mosul but is captured. The SEAL team, with information from the Geek Team, with a contingent of Rangers rescues the prodigal son while shaming the ISIS leader.

Like the previous book this was quickly moving story was an engaging read from start to finish, especially the first two-thirds of the book when the kidnapping of the admiral was the main plot. However, once his son decided to go rogue the end of the book was relatively telegraphed paint-by-the numbers ending. Yet despite the “going rogue” cliché and the ISIS leader’s desire to “go live for the evening news”, the action was particularly good which made up a tad for the headshaking narrative turn. Overall Galdorisi’s solo effort was good and while I wish he would have avoided the stupid “going rogue” trope as it probably would have improved the book some, it did not ruin it.

Scorched Earth is a good military-political thriller and is George Galdorisi only solo effort in the reboot series, so far. While I did not like subplot that finished off the book, it did not make the book bad and throughout the action scenes were solid. Overall, this book is better than a vast majority of the original Op-Center run.